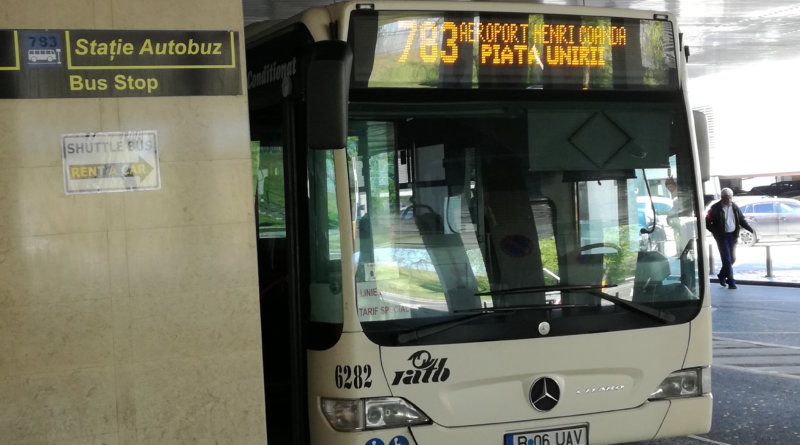 Henri Coanda Bucharest Otopeni Airport it’s at around 10-15 kilometers North of City Center so upon arriving, if it’s not waiting you anybody, you will definitely need some kind of transportation to the city.

Limited options to get from the Airport to the City Center

Options to get from the Airport to the City Center are quite limited in Bucharest. Especially when you compare the Romanian Capital to other European cities. There is no metro line connecting to City (although there are plans for one), the train line is such a bad idea I won’t recommend it (note that you need a 2 kilometers transit to the train “station”) so the only options would be the public transport offered by RATB or the taxis.

You should know that it is very likely that the taxi’s in Bucharest to be the cheapest one you ever paid in Europe. Regular fares are at around 0,30-0,40 EUR’s per kilometer, although I would really recommend that you should order a taxi and not take one directly as you exit the terminal. If you taxi a pirate taxi the fare would triple, but still would be lower than you ever paid in Europe.

Uber could be the best idea

If you really want to take a car to the city center – Uber would be the better idea. The prices are the same as the taxi’s (if there is no surge) for the Uber X. Uber Select is not that much more expensive. To be honest, I always take Uber from the airport because I never leave a tip. Taxi drivers expect a tip of at least 5 lei for a trip from the airport.

Just note that Uber does not have a legal way of operating in Romania – so it’s somewhat in the grayish area.

Besides Uber there are other apps that are gaining popularity in RO – one if it is Taxify.

There are two bus lines from Bucharest Henri Coanda Airport – 783 which will take you to the city center and 780 which will take you to the Gara de Nord Train Station. A single trip is 3.50 RON (0.80 EUR) but you will need to get a minimum of a return ticket RFID card. If you decide to use public transport in Bucharest (1.30 RON a single trip) you should top up an RFID card (sold at 5.00 RON) with a couple of tens of lei’s (RON = lei).

Buses leave from the same place, right in front of the domestic arrivals hall. International arrival hall at the airport is one floor upper, so it is really not hard to find the bus station downstairs.

You can download the schedule for the 783 line here and for the 780 line here. Beware of the large PDF file. Although it is Romanian I am convinced that you will find it somewhat useful.

Starting January 1, 2019 the public transport company from Bucharest added a new line: the 782 that connects the Airport to Baneasa Mall Shopping Center, where you can easily commute on other lines depending on where in the city you want to get.
This line operates from the airport everyday between 08:30 – 22:30 with a 20 minute between the buses.

The buses don’t have a baggage hold and on rush hours can be really tight. They are not necessarily designed for passengers arriving at the airport, but for workers at the airport. RATB is using the same buses for these lines as in the cities, but they added the “Expres” naming for the lines because they don’t do all the bus stations, only the most important.

It is still a great way to get in the northern part of Bucharest, train station or City Center on a budget and without much luggage.

Time to the city center or train station

Please note that travel time from the airport to the city center or the train station can really vary depending on the hour of departure. If in the middle of the night the route can be made in 20-30 minutes, during rush hours I wouldn’t be surprised if you would do one hour or more to the airport, even if the distance is not that long.

Besides that I wouldn’t really indicate to relly on the schedule of arrival, I would strongly recommend taking a taxi if you are traveling with large pieces of luggage. If you already have an Uber account, do take an Uber. You will meet the driver in the parking lot in front of international arrivals, it’s not that hard to spot it.